The Baccarat card game, which is known for its popularity among royalty, spies, and movie stars, may look complicated initially, but understanding the rules is quite simple. The main difference between punto banco, baccarat Banque, and chemin de fer (which was James Bond's preferred game and is not often found in online casinos or beyond France) is the person responsible for shuffling and dealing the cards.

Baccarat is a game of luck and usually involves two players - the banker, who could be the casino or another person, and the player. When playing baccarat, card counting is largely ineffective until late in the shoe, and even then, it still depends on the game's rules.

The winner of the current hand does not necessarily win the bet unless they have placed a wager. This difference is where the thrill of the game lies.

Your success in the card game depends on the hand you bet on, not necessarily the one that wins. The rules are simple: the hand with the higher score wins. Each card corresponds to its numeric value, which means an ace is one and card nine has a score of nine. However, tens and face cards have no value.

There is an extra layer to the scoring system. The rightmost digit of the sum of two cards determines the score. Therefore, if your hands have a combined value of 12, after getting a nine and three, your score is two. This rule describes why 10s and face cards are assigned a value of zero.

When playing baccarat, two cards are typically dealt to each player, after which their values are tallied. If either of the hands has a value of eight or nine, no additional cards are drawn. Otherwise, the players look up the rules to decide who should draw next. They cannot draw more than one extra card on each hand.

In addition, you can bet on the player's hand, the banker's hand, or a tie. A player's hand pays out at one to one, the banker's hand pays at one to one with a 5% commission to the house, and a tie generally pays out somewhere around eight or nine to one. In a nutshell, that is how to play baccarat. However, there are also some variations which we will explore further.

The three different versions of baccarat have slightly different rules for the dealer-cum-banker, which might seem to be a bit confusing for beginner players. But never fear, as it is not as complicated as it might appear at first. The question is simply who acts as the banker-cum-dealer, and when (or if) that position rotates amongst the players. While the basic rules are the same, baccarat dealer rules change marginally, depending on the game.

Baccarat may confuse those new to the game, as the banker's rules differ from version to version. However, it all boils down to who acts as the banker and when (or if) that role is rotated amongst the players. Despite the slight variations, the fundamentals remain the same.

Punto banco is the most common form of baccarat, where the house is always the banker (dealer) and players bet on the outcome. As it requires minimal active involvement from players, it is relatively straightforward. Casino baccarat is generally based on punto banco rules. 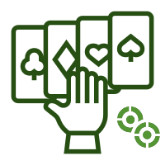 In comparison, Baccarat Banque and chemin de fer have a rotating banker role. The banker will stay in their position until they lose a hand in chemin de fer. On the other hand, the banker will remain until the cards in the shoe have been dealt or until they retire or are unable to continue financially in the Banque version. However, these games rarely exist outside high roller rooms in Europe.

While the playing rules may vary depending on which version of baccarat you prefer, you will definitely have a great time playing this fantastic game.

Playing baccarat online has its perks. All you need to do is place your bet, click a few buttons, and be patient. The principles required to play baccarat online in India remain the same as those of the physical game. However, the speed of play is usually much faster.

Most online casinos offer a variety of baccarat variations, such as punto banco and regular baccarat. Players with different budgets can take advantage of the wide range of options available. Additionally, casinos have a table limit for an extra layer of protection, so that's a plus.

Baccarat has become well-known due to its association with high stakes and big pay-outs. James Bond and the Prince of Wales had notable encounters with the game. If you are worried about having to bet large amounts, fear not – online baccarat betting rules allow you to play with limits that suit your budget.

Beware of the maximum bet limits that most online casinos have in place. While this isn't to protect you, the player, it limits your potential losses. In addition, adhering to other rules of online baccarat can help to keep your wallet intact, so it's essential to exercise caution while playing. Though you shouldn’t forget to have fun!